Having always lived by the sea in a small village in South West Wales, the beach has been my back garden for as long as I can remember (the photo below was taken in 2003). 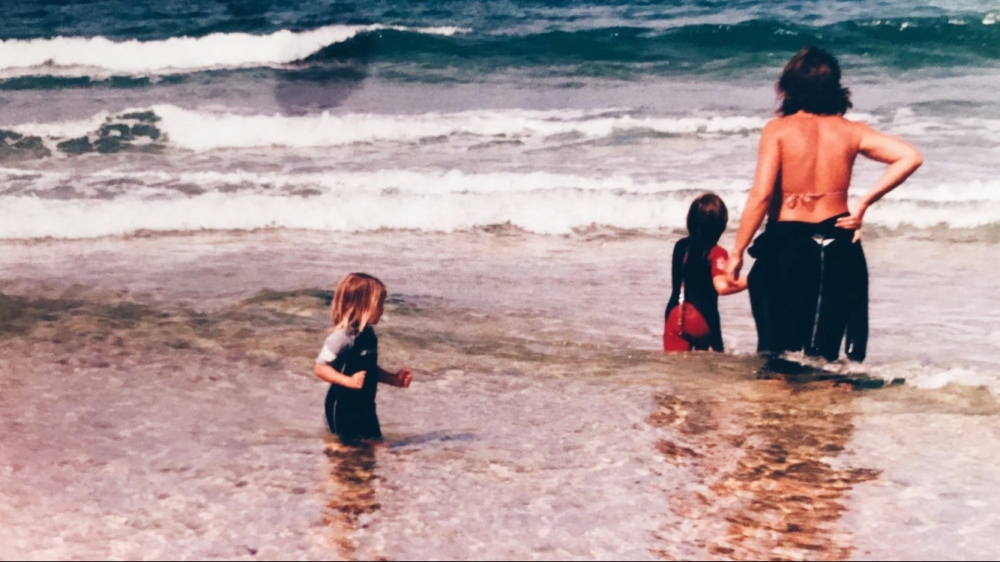 I have always been fascinated by the ocean and it’s inhabitants but never did I fully realise the extent until I dived under the waves of the Indian Ocean for the first time; surrounded by Sharks, Manta Rays and schools of colourful fish – I had never felt more at home.

I had the opportunity to volunteer for 2 weeks with the Maldives Whale Shark Research Program in September 2015.

The aim of the programme is ‘To conduct whale shark research and foster community-focussed conservation initiatives throughout the Maldives.’ So for two weeks I spent my days out on the Dhoni (Maldivian for boat) searching for whale sharks. These sharks are the largest fish in the sea, measuring up to 12m or more. They come up to the reefs and shallower water to rest and feed, opportunities to quickly jump in and snorkel next to them! 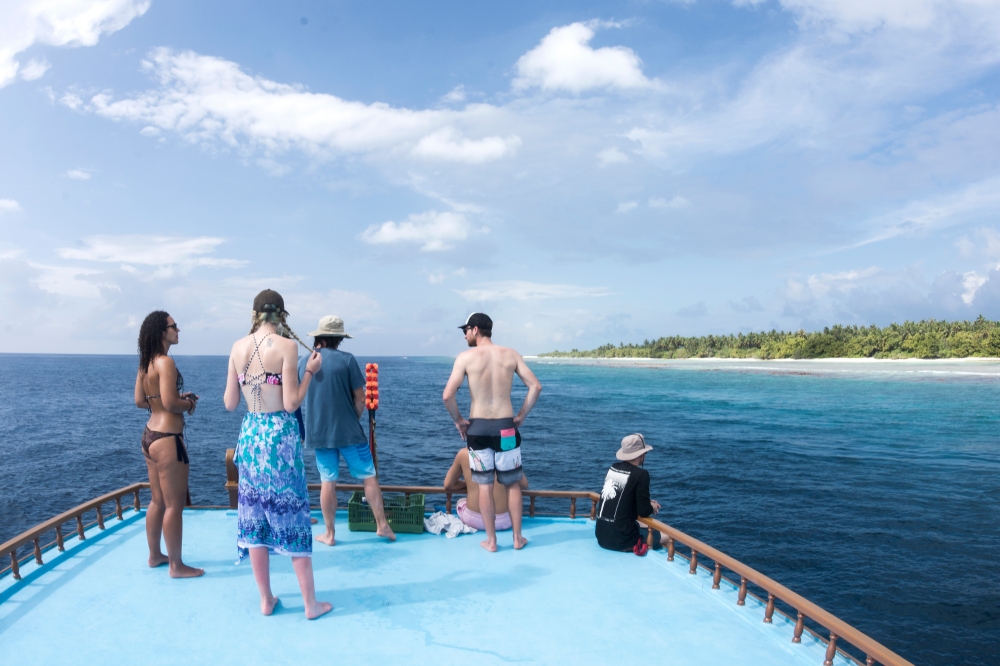 The research focus’ on movements, size, sex, threats and the influence of environmental factors on the whale sharks in the Maldives, which is one of the only places in the world that whale sharks are year round residents. Each shark is named and logged into a data base to try and track how many sharks are in the Maldives and to keep an eye on their wellbeing. 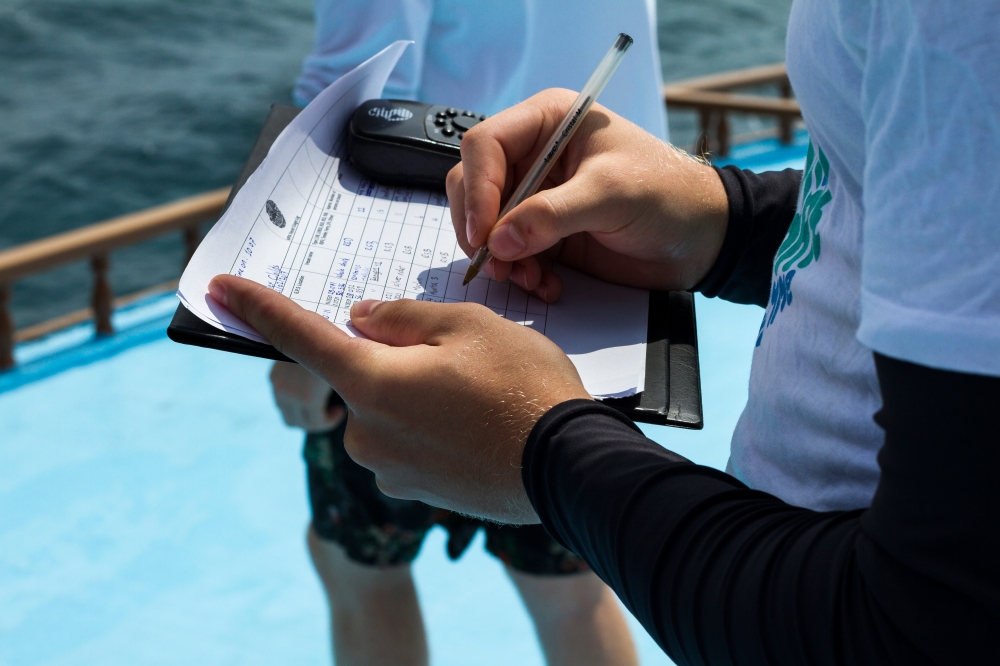 Two years on, I kept in contact with the Project Manager and on mentioning my eagerness to return, he proposed an idea that I come back to the island and do some promotional photography for the program, whilst completing my final university project on the side.

Working as in-field photographer for the MWSRP meant long days and local living, but the whole experience was an absolute dream. Before arriving at the local island, where I would be spending the next four weeks, I stayed a night in Malé, the capital of the Maldives.

Although I was extremely jet-lagged and running on only 3 hours sleep, I had to explore this crazy city as I’d only be here for under 24 hours.

Walking the busy streets the roads are filled with motorbikes speeding everywhere and what seems like hundreds of people in every direction. This is one of the most densely populated cities in the world at just 1.7 kilometres and home to more than 100,000 people. I noticed in most of the souvenir shops, shark jaws dominated the window displays alongside coral and shark teeth. A Maldivian man called Asif noticed my interest and explained that the jaws are mostly imported to supply the tourism demand, as shark fishing is illegal in the Maldives. Whether they are being illegally caught or imported for tourism reasons is questionable, and I don’t know which is better.

Asif kindly offered to show me around the city – exploring the local fruit and vegetable markets, fish market, ‘Hukuru Miskiyy’ (Friday Mosque) which was constructed in 1656 with beautifully engraved coral block walls and the largest Mosque in the Maldives, which allows 5,000 people to pray at once. Dhigurah island itself is very small and populated mainly by the local Muslim community, apart from the few guest houses on the island where tourists can stay year round. Palm trees are the main vegetation (coconut is a popular ingredient in Maldivian cuisine) and houses are very basic – rain water is collected in tanks to drink and food is only delivered to the island once a week.

The local community follows a strict Muslim religion and people must cover up and be respectful when on the island. Friday is prayer day, but the ‘call for prayer’ is heard on the island from a loud speaker every day and up to five times on Fridays. From my experience with the people, the Maldivian hospitality is striking and more than once were we welcomed into their homes for a delicious home-cooked Dhal (that I quickly became obsessed with). 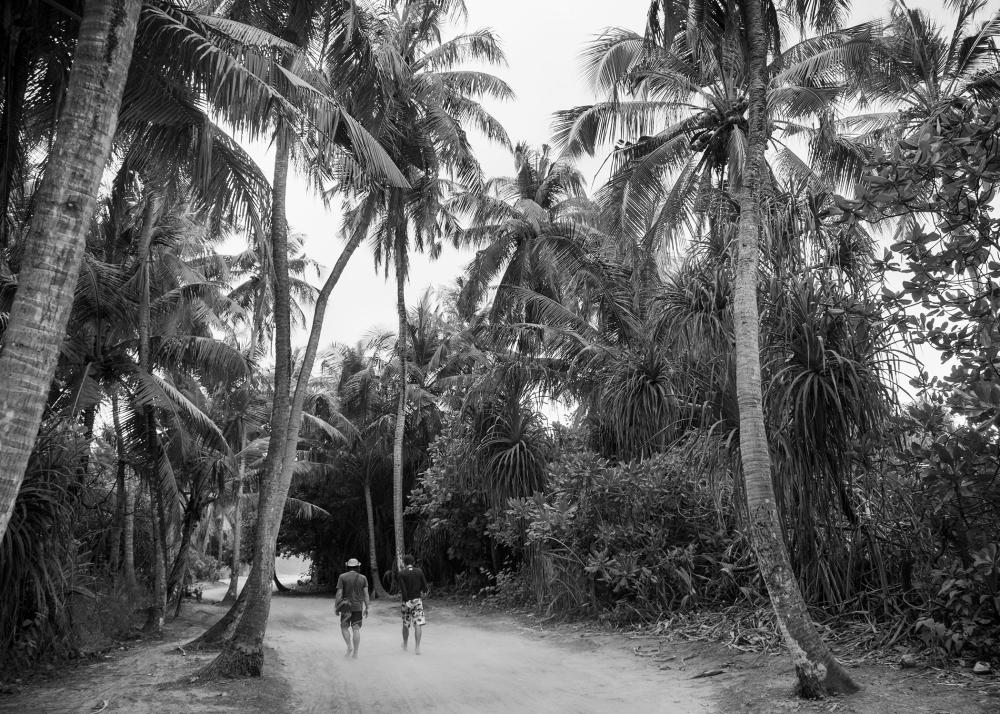 Whilst I was working for the MWSRP I was staying in a local house on the island. During the second week of my stay we had students from the Singapore American School stay in one of the guesthouses and spend the week with the MWSRP learning about all things Whale Shark and marine conservation related. This was a fun and challenging week as the students really got involved and learnt all about their own impact on the environment as well as what they can do to minimise it. 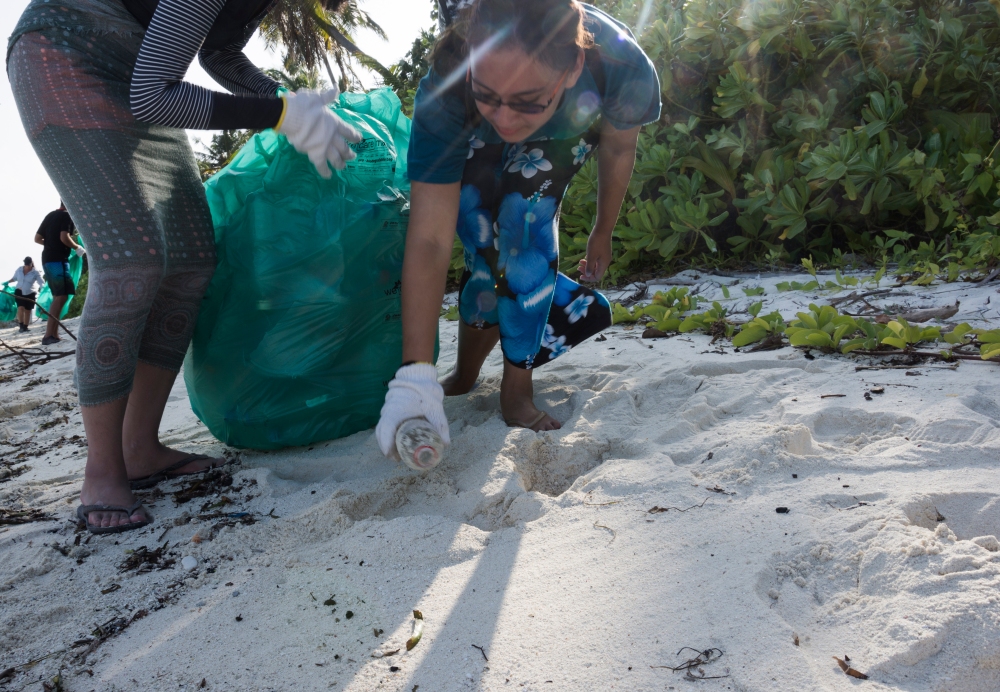 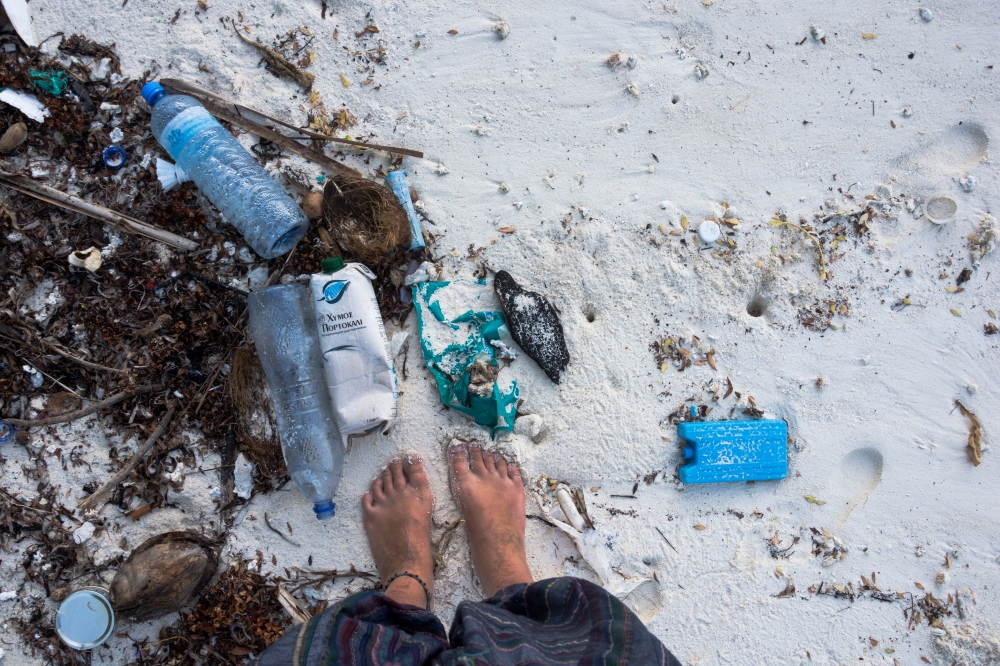 From swimming with whale sharks and collecting and recording data on the reefs, to beach cleans, workshops and talks at sunset, the students had a life changing week and I was privileged to be there to photograph and share it with them. 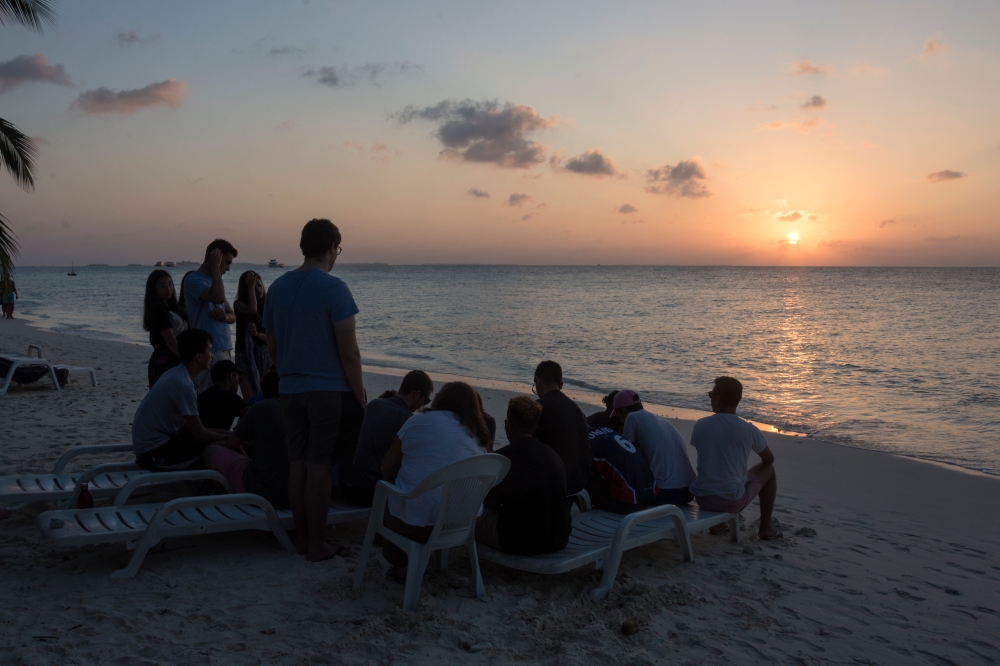 The last two weeks I spent as a volunteer with 6 others staying in a guesthouse at the other end of the island. During these two weeks I met some amazing like-minded people and spent days out on the reef collecting data on the whale sharks and other mega fauna as well as taking part in a community outreach project called ‘Moodhu Kudhin.’ Moodhu Kudhin, meaning ‘Children of the Sea’ in English, aims to develop a growing awareness ‘for the beauty and fragility of the unique environment in the Maldives’ and perhaps inspire the next generation of scientists to aid in it’s protection.

We visited the local island of Mandhoo and 20 students were given the opportunity to join us on the MWSRP research Dhoni, learning first hand what it takes to collect scientific data. After a day on the Dhoni learning about the marine ecosystem and the work the MWSRP do, lessons in the classroom followed in the evening surrounding the subject of marine litter. 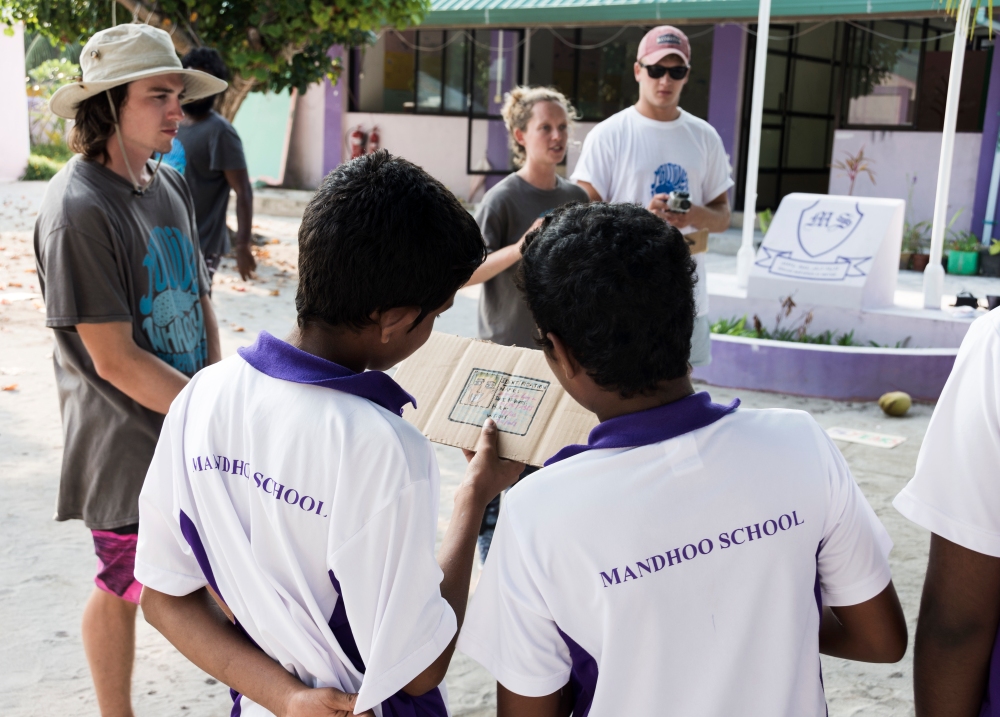 Some of these students hadn’t even been off their island before never mind onto the reef and swimming with huge Manta Rays and other mega fauna. Each child was given a certificate of participation at the end of the day and walked away with a much better understanding of the eco-system right on their doorstep. 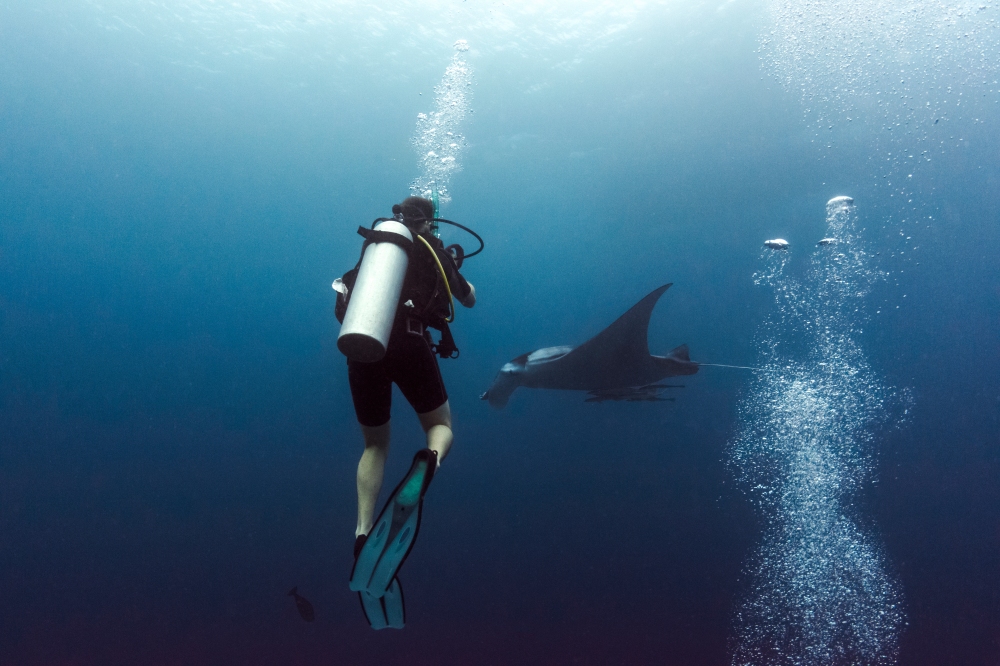 It is hard to compress this whole experience into a blog post (especially one with a photo limit!) and I don’t think anyone will be able to fully understand the extent of it unless they were to experience it themselves. The people I have met and the things and places I have seen have all taught me so so much. This invaluable experience is something that has changed me as a person, as well as a photographer and only enforced my passion for the natural world and my determination to protect it. How can you swim/ interact/ share a habitat with these amazing creatures and leave feeling the same? I am in love with this place under the waves. It’s where I feel most at home, most calm and where everything seems magic. Sometimes it really is as simple as following the path that you love.