Known around the world as a massive draw for a lot of tourists because of the nightlife. But that’s not all it has to offer.

We didn’t really venture here to see the nightlife in particular (definitely not just the fact we couldn’t stay for more than 24 hours…) although I can’t deny it would have been a crazy experience after seeing Khao San Road, the well known party strip.

Picture a massive busy strip in Magaluf with hundreds of tourists carrying around buckets of booze and dancing all night and you can probably picture Khao San. A dream for some, but we didn’t really fancy spending our only night here like that – so if it’s nightlife you’re after, head straight here! (Although not in the daytime, it just smells like sick from the night before and a bit like clogged drains, lovely). 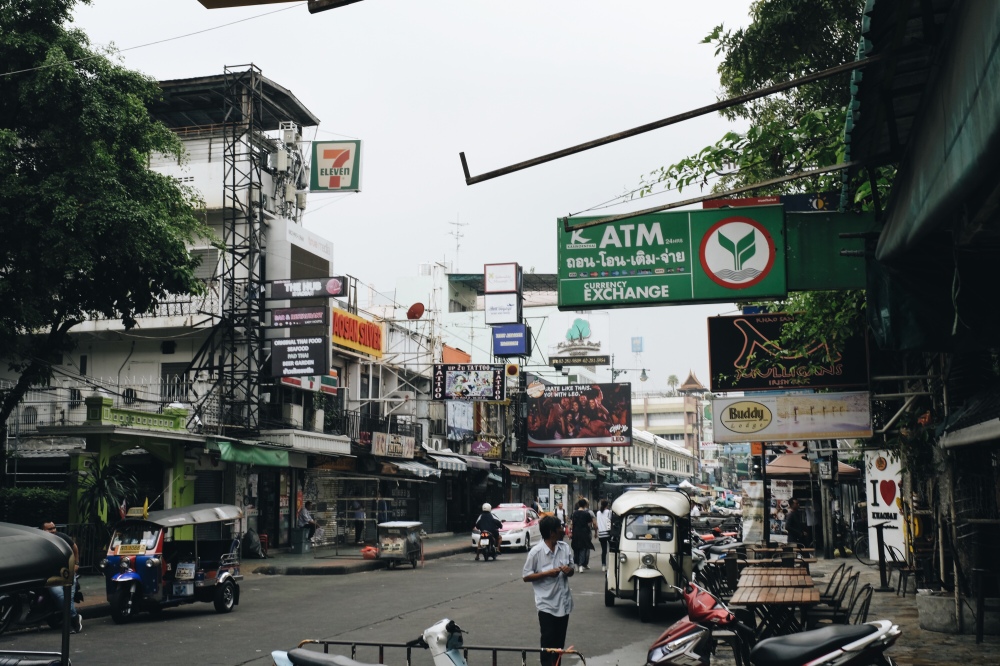 We quickly realised there is SO much to see in this city without just wanting a night out. Here are a few things we got up to and discovered about Bangkok along the way… 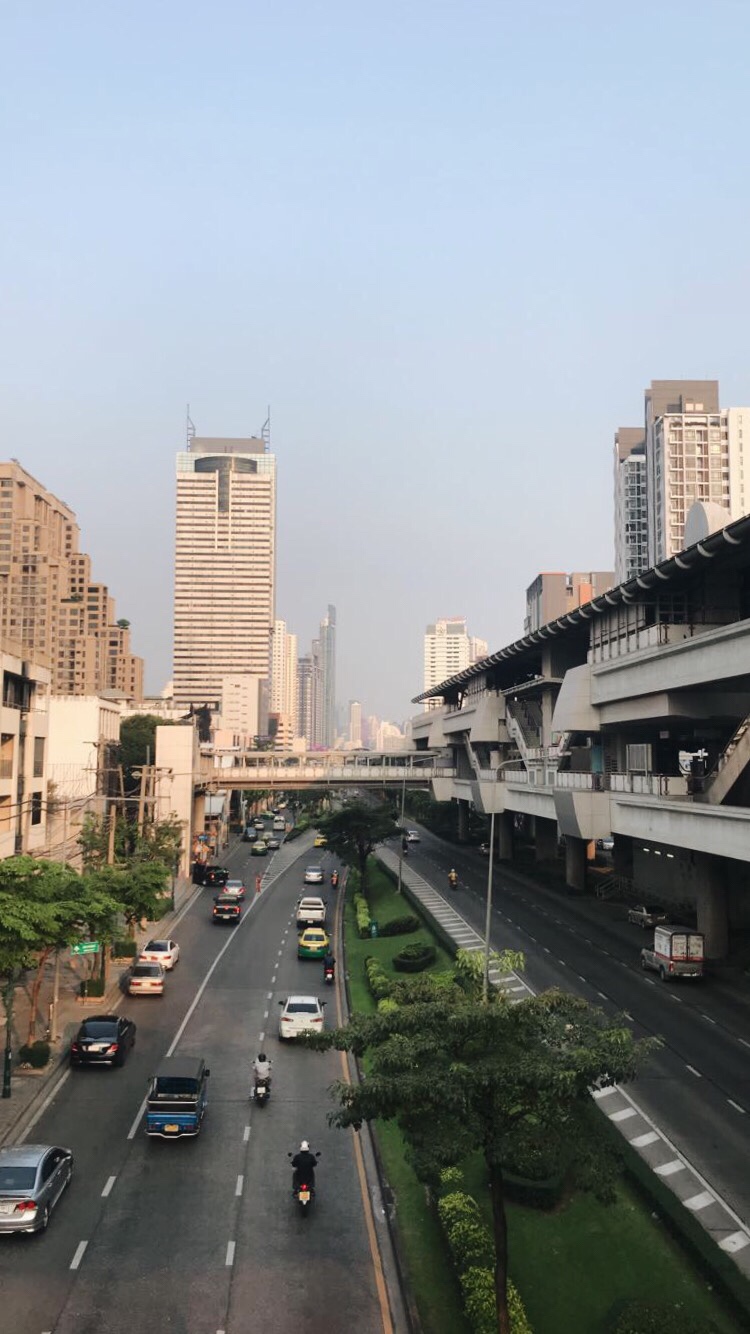 People told us this before BUT, nothing can prepare for the heat of Bangkok. It’s like the city just absorbes all the suns warmth and traps it amongst all the millions of people walking (and getting lost) in it’s streets. Prepare to sweat, A LOT.

One of the main tourist attractions is The Grand Palace, one of the oldest Buddhist Temples in Thailand – but you have to pay 500 baht to walk around shoulder to shoulder with HUNDREDS of other tourists and in that heat we just really weren’t okay with it (the image above is a view from outside its walls so photo evidence we did actually see it, kind of…)

Instead we stumbled upon a place called the Golden Mount, a beautiful Buddhist Monument and Temple with a birds eye view of Bangkok from the top. Much more pleasant, and much less touristy. 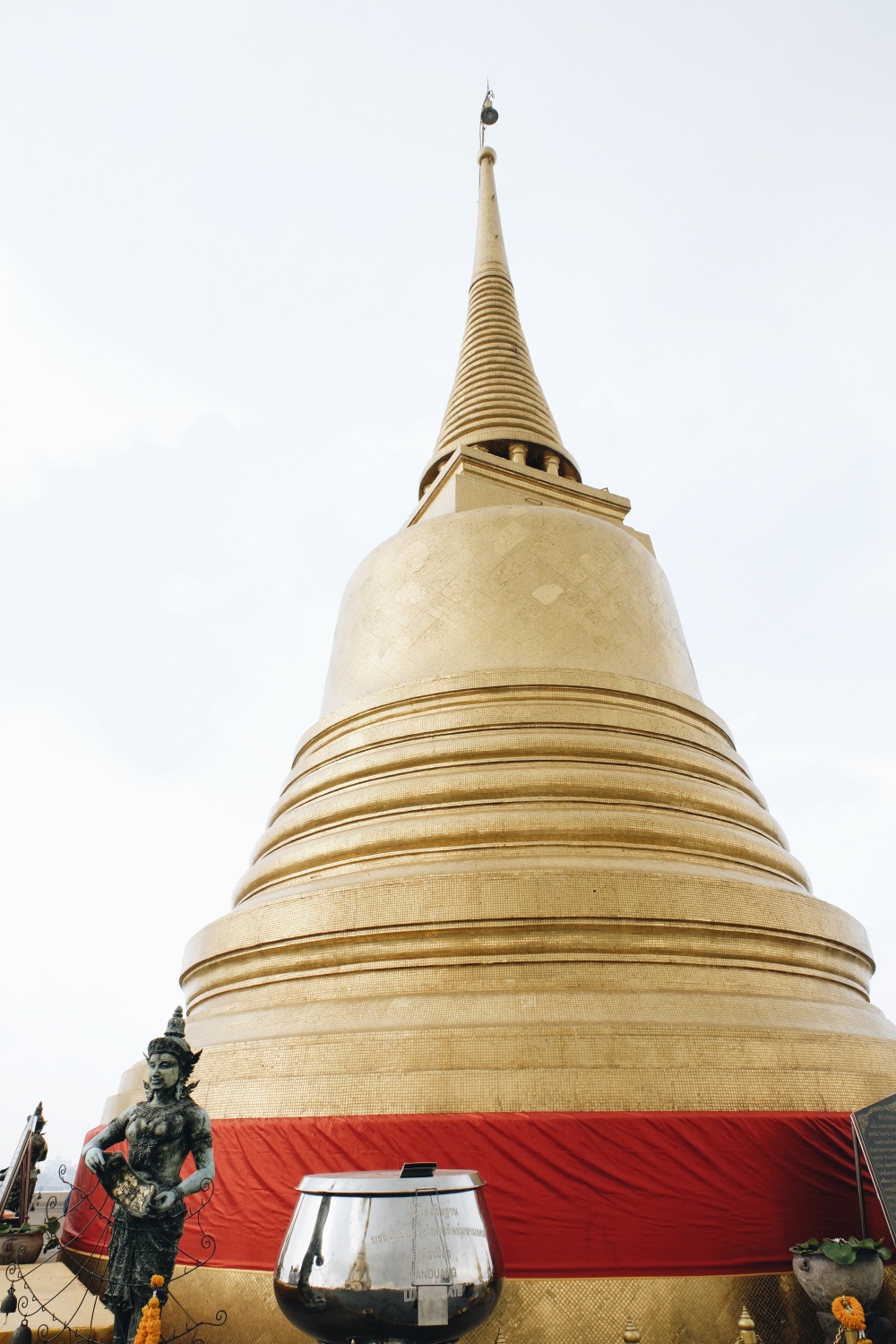 We then ventured to China Town where I ate my first Chinese Bun and stumbled through a street of markets over 2 miles long! 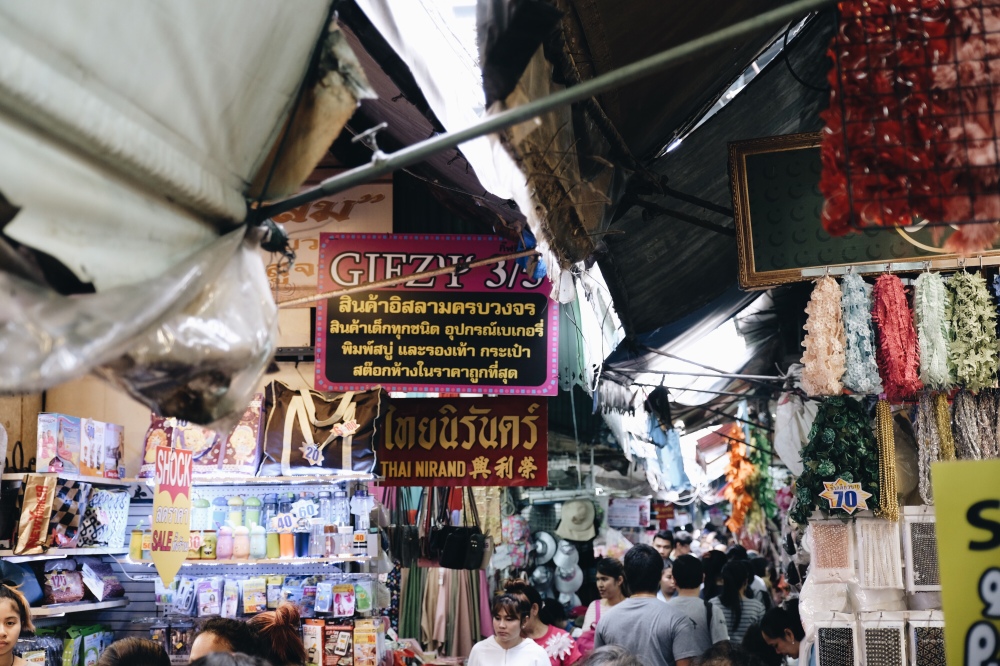 There’s lots of street food to pick up here in Thailand and fruit shakes were definitely our favourite thing to grab whilst traipsing around the city.

Although one thing I did unfortunately notice in China Town was a couple of restaurants serving shark fin soup – are they really still doing this?!?!

Finding parks in cities is one of my favourite things about them. A break from the concrete jungle, giving way to an actual mini jungle right in the center of busy Bangkok – Lumpini Park. You can even rent peddle boats shaped as swans (or just fall asleep under a tree like I did). 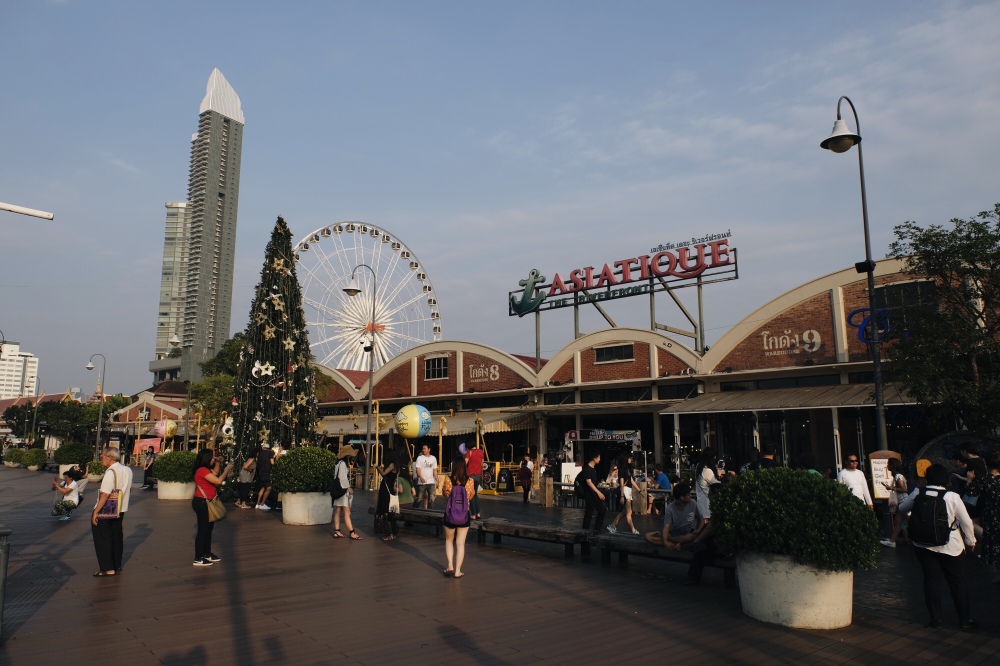 We found our way to the pier and jumped on a free taxi boat to “Asiatique,” described as an open air night bazaar it was definitely something worth seeing, even if just to get away from the crowded streets for an hour or two. This solace wasn’t felt for long as soon Asiatique was hit with hundreds of private Chinese tours and it felt like there wasn’t enough room on the pier.

We pictured some cheap street food markets but were met with a more ‘shopping complex’ feel. Even the food was doubled in price but at least we got a beautiful view of the Bangkok skyline from the water and a Ferris wheel lighting up the night sky, am I right?!

(You can probably skip Asiatique if you don’t like big crowds and want a Pad Thai for less than 150 baht).

Over the whole day we ended up walking 13 MILES (partly because we were too stubborn to pay for taxis…) from the Old Quarter to the new shopping districts, Bangkok is massive and seems to have something for everyone. 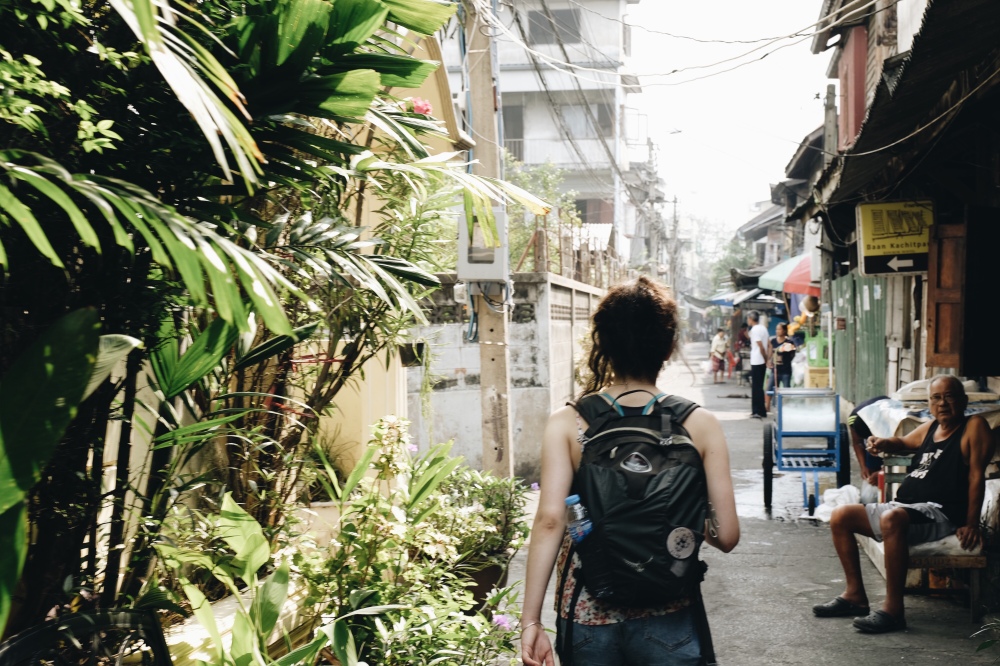 I’ve mentioned before that walking around a place is such a good way to see somewhere as so much is missed by just sticking to tourist trails and whizzing by on a motorbike.

One of my favourite moments of our time in Bangkok was walking home under a massive bridge and coming across a park full of locals. There were young boys playing football, kids playing basketball and tennis, a complete outdoor gym packed full and a family having a run around the outskirts – this was a Friday night in one of the busiest cities in Asia! Seeing daily life and communities that often go amiss is one of my favourite things about travelling.

No matter where you are in the world or who you’re with, it’s the most simple acts that bring comfort and remind you that we are all the same. 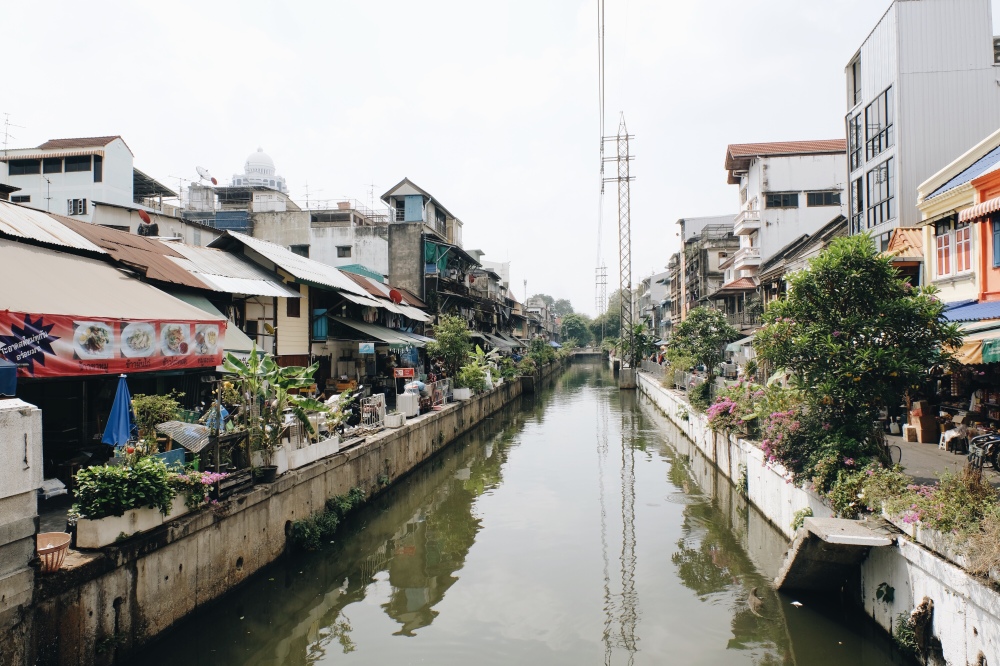 Our Thai host Joy explained that a lot of people just see Bangkok as this mass of business and nightlife, but in reality it’s the small communities that hold it together. Bangkok wasn’t built for tourists, and it doesn’t survive just from tourism. It’s a buzzing city with a life of its own underneath the top layer of crowds, and I really really have started to love that part of it.

Joy was openly surprised that we managed to walk so much and see so much in one day, she resisted the urge to call us out on how weak we looked and just said that she had underestimated us and was shocked by our strength instead…

Is that a good or a bad thing?!

We ended the day exhausted with a cup of Thai tea and a 30 Baht papaya bought from a street stall (strange things happen when you’re that tired).

Bangkok, like Joy did with us, I definitely underestimated you.